The first full budget of the second term of the Modi government has been presented. Finance Minister Nirmala Sitharaman while presenting the budget for the financial year 2020-21 on 01 February 2020 said that the average growth rate during 2014-19 was more than 7.4 percent. Average inflation during this period was 4.5 percent. He said that India has now become the fifth largest economy in the world and the central government’s debt has come down to 48.7 percent of gross domestic product (GDP).

The Finance Minister has announced new tax rates. In which the middle class is relieved. At the same time, the government has announced to sell a part of its capital in LIC and the entire part of IDBI.

@ 1: 45 pm: Finance Minister Nirmala Sitharaman has given the biggest budget speech ever. Earlier, in 2003, Jaswant Singh gave a speech of 02 hours 13 minutes. The Finance Minister’s speech started at 11 am, which lasted more than two and a half hours. 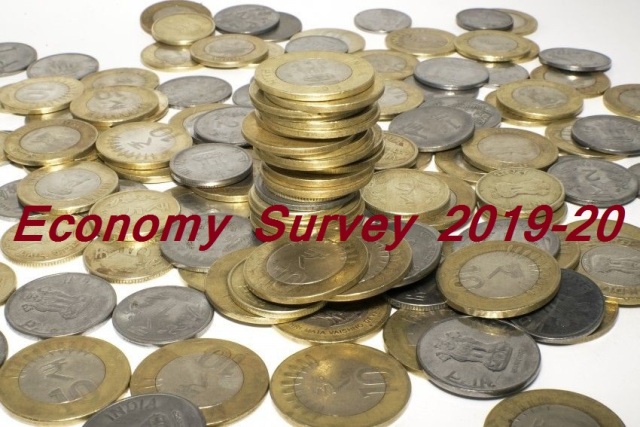 @ 1: 38 pm: No deduction will be included in this under the new tax system, those who want to take the deduction can pay tax at the old rates. Tax concession has been given to promote the startup system. The limit of business has been increased from 25 crores to 100 crores. 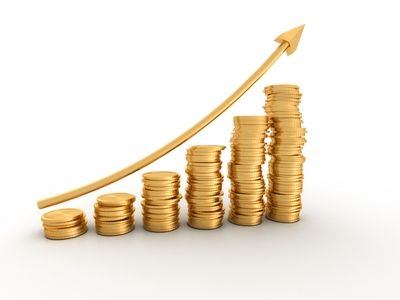 @ 12: 59 pm: In the finance sector: the remaining capital of IDBI Bank will be sold on the stock exchange. The Finance Minister announced that up to Rs 5 lakh deposits of people in banks will now be safe. Earlier this limit was only 1 lakh rupees. This means that if an account holder gets a rupee, then they are guaranteed to get five lakh rupees.

@ 12: 58 pm: Finance Minister Nirmala Sitharaman said that the 15th Finance Commission has given its report, which the government has accepted. The expenditure in this financial year is estimated at Rs 26 lakh crore.

@ 12: 48 pm: The government will arrange full monitoring on all banks. Concrete steps will be taken to improve the banking system. This year the fiscal deficit is estimated to be 3.8 percent of GDP. A target of 3.5 percent has been set for next year.

Declaration for Ladakh in the budget

@ 12: 35 pm: Ladakh in the budget: Finance Minister Nirmala Sitharaman said that the central government is committed to the development of the northeast. The government will continue to work for the development of Jammu, Kashmir, and Ladakh. It is proposed to allocate Rs 30,757 crore for the recently formed Union States in 2020-21. A budget of Rs 5958 crore has been announced for Ladakh by the government.

In the field of tourism development:

In the field of environment and climate change:

@ 12: 25 pm: In the field of environment and climate change: from 01 January 2021, manufacturing will be focused on keeping the climate in mind. Development works will be done keeping in mind the natural disaster. New plans have been made for clean air in cities. For this, Rs 4400 crore has been allocated.

@ 12: 24 pm: Several measures will be taken to prevent pollution. 4 thousand crore rupees are being spent so that people can get clean air. The Finance Minister said that the issue of security is the most important in the country.

@ 12: 20 pm: Art Culture Zone: Such museums will be built which will be world-class. 5 mythologically important sites are being developed. 3150 crores were allocated to the Ministry of Culture.

@ 12: 19 pm: In this budget, it has been proposed to make the Indian Institute of Clutch. Some iconic museums will be built in the country, including Hastinapur in Meerut district.

@ 12: 10 pm: Women Child Development Sector: ‘Nutrition Campaign’ was started to increase the level of nutrition. A new policy will be introduced for newborns. 35,000 crore for nutritional policy. Rs 33,000 crore was allocated for Scheduled Castes and Tribes.

@ 12: 09 pm: Beti Bachao-Beti Padhao schemes got a lot of support, there has been a big difference in child ratio through this scheme. Information about the nutrition of 10 crore families will be given. More than 6 lakh Anganwadi workers were given smartphones.
@ 12: 08 pm: The marriage age of women was increased, now our government is also discussing the age of girls becoming mothers. A task force will be formed which will prepare a report on this issue in 6 months. 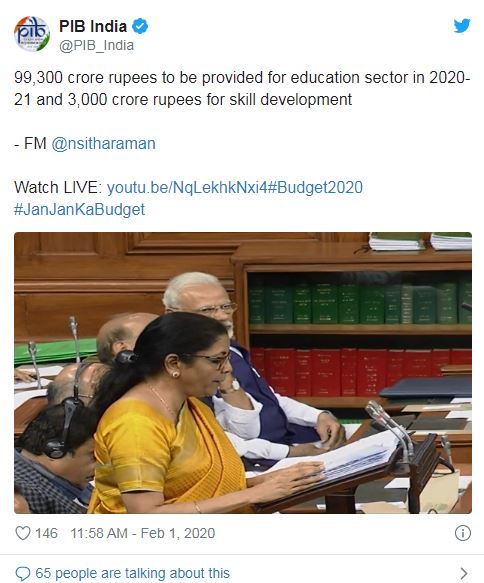 Budget in the field of the industry:

@ 12: 05 pm: In the area of ​​industry: Data Center Park will be built. Private sector participation will be important in this. All gram panchayats will be connected with Bharat Net fiber cable. Rs 8,000 crore is being allocated for quantum technology, India is the third-largest country in this field.

@ 12: 04 pm: Infrastructure companies will be appealed to add youth to their startups. Traders should be confident that the government has done justice to their tax.

@ 12: 03 pm: Nirmala Sitharaman announced that the formation of Investment Clearance Cell through which the investors will be helped. A new scheme has been announced by the government for the electronics manufacturing industry. In this, mobile, electronic manufacturing will be promoted.

@ 12: 03 pm: A scheme will be launched to create export hubs in each district. For this, people will be given loans under Nirvik Yojana. There is a target of investing Rs 100 lakh crore in the next five years.

@ 12: 02 pm: In the area of railways: 5 big steps for railways, railways are being connected with solar energy. To connect big cities, the number of trains like Tejas will increase. Delhi-Mumbai Expressway, Chennai-Bengaluru Expressway will be completed soon.

@ 12: 01 pm: 24000 km. The train will be made electronic. The number of Tejas trains will be increased. Bullet train work between Mumbai-Ahmedabad will be expedited. Water development road will be extended, there are plans to extend this route to Assam. Rs 1.70 lakh crore will be invested in transport.

Budget in the field of health:

@ 11: 58 am: Health sector: The government is taking big action to promote the Fit India movement. The number of hospitals in Ayushman Bharat scheme will be increased, so that help will be provided in T-2, T-3 cities. For this, the help of the PPP model will be taken, in which hospitals will be connected in two phases.

@ 11: 57 am: Rainbow mission being run by the central government will be expanded. Whatever tax is received on the medical device, it will be used to promote medical facilities.

@ 11: 56 am: Campaign will be launched in the country against TB, ‘TB will lose, the country will win’. The government is trying to make the country TB-free by 2025.

@ 11: 55 am: Number of centers will be increased under the Pradhan Mantri Jan Aushadhi scheme. Announcement of about 70 thousand crores for health schemes.

In the field of education:

@ 11: 54 am: Government is working to improve higher education, students of the world will be given facilities to study in India.

@ 11: 52 am: Students from India will also be sent to countries in Asia, Africa. It is proposed to make National Police University, National University of Judicial Sciences.

@ 11: 50 am: A plan will also be made to establish medical colleges in district hospitals. An internship facility will be provided to young engineers to work in local bodies.

@ 11: 47 am: Teachers, nurses, paramedical staff are required in a big way in the country. Special courses will be made for them so that world-class skills can be made available. 99000 crore rupees will be allocated for education.

@ 11: 46 am: Forensic University, Police University will be formed. Special medical colleges will be made at the district level.

@ 11: 45 am: Online education will be provided for children from disadvantaged areas of society. New education policy will be announced. 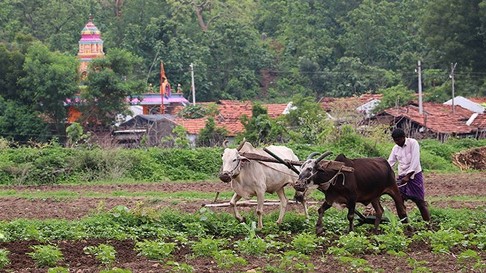 @ 11: 38 am: Special arrangements will be made to deal with solid waste. With the allocation of Rs 3.6 lakh crore, water will be provided from the tap in every house.

@ 11: 36 am: Kisan credit card scheme will be extended for 2021. The government will run a scheme to double milk production.

@ 11: 35 am: Fisheries will be promoted through Blue Economy. Fish processing will be encouraged. Assistance to farmers will be increased under the Deen Dayal scheme.

@ 11: 32 am: Indradhanush mission has been expanded. Priority will be given to areas without Ayushman impaneled hospital. AI will be used so that diseases can be controlled with the help of technology.

@ 11: 28 am: Blessed Laxmi Yojana for women farmers was announced. Under this, women will be mainly linked to seed related schemes. The government will start Kisan Rail and Udaan service.

@ 11: 26 am: Nirmala Sitharaman said that a big scheme will be run for the water systems in 100 districts so that farmers do not face any problem of water. A provision of Rs 15 lakh crore has been made for the agricultural credit space sector.

Farmers will be assisted by NABARD under the village storage scheme. In this, farmers will be able to preserve their produce. Agricultural flying will be started.

@ 11: 24 am: Making a big announcement for farmers, Nirmala Sitharaman said that our government announces a 16 point formula for farmers, which will benefit the farmers. There is a need to open farmers’ markets so that their income will be increased.

@ 11: 23 am: Government will insist on the limited use of chemical fertilizers. Giving the example of Tamil Nadu, the Finance Minister explained the usefulness of the land.

@ 11: 22 am: Solar pumps are being installed to eliminate the dependence of diesel kerosene. 16 lakh farmers will be given assistance in the first phase. Barren land can be used for solar energy systems, which can benefit the rest of the farmers.

@ 11: 21 am: Nirmala Sitharaman said that the insurance scheme is being run for 6.11 crore farmers. The income of farmers will be doubled by the year 2022.

@ 11: 18 am: Nirmala Sitharaman announced that an easy version of Goods and Services Tax (GST) will come in April 2020. This will ease small traders.

@ 11: 15 am: Finance Minister Nirmala Sitharaman said that our government is moving forward on the policy of Sabka Saath, Sabka Vikas, and everyone’s trust. India is leading the growing economies in the world today.

@ 11: 13 am: Nirmala Sitharaman said that with the help of technology, efforts will be made to improve the economy. Also, an effort will be made to bring the country on the path of progress by connecting the youth with technology.

@ 11: 12 am: Nirmala Sitharaman told that 271 million people have been taken out of the poverty line. We have become the fifth largest economy in the world.

@ 11: 11 am: Nirmala Sitharaman said that crores of people have benefited from housing schemes and pension schemes in the country. Our growth rate has been better than in other countries all the time.

GST initially faced difficulties but now in the last 2 years, about 16 lakh new taxpayers have been added. Nirmala Sitharaman described GST as historic. He said that there is something special for every section in the budget 2020-21.

@ 11: 09 am: Union Finance Minister Nirmala Sitharaman said in his speech that Narendra Modi’s government got the majority in the Lok Sabha elections, the results of 2019 are the mandate given on our policies.

@ 11: 06 am: Nirmala Sitharaman paid tribute to former Finance Minister Arun Jaitley and started the budget speech remembering his contribution to the economy.

@ 11: 04 am: Finance Minister Nirmala Sitharaman has started reading her budget speech in Lok Sabha. The proceedings of the Lok Sabha have started.

@ 10: 57 am: Cabinet approved the budget in the meeting held in Parliament House. Sitharaman is going to present the country’s bookkeeping in the Lok Sabha in a while. 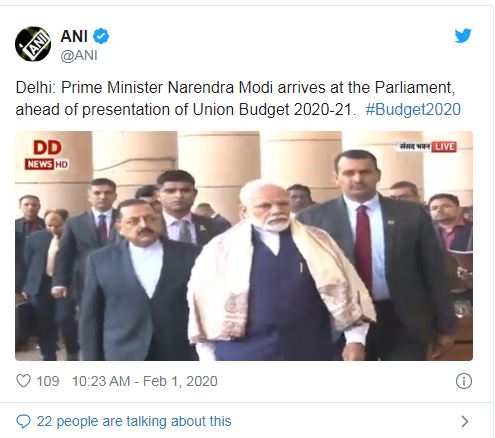 @ 10: 18 am: Nirmala Sitharaman will present her second budget today. Many steps can be announced to increase private investment in railways.

@ 10: 07 am: Officials and ministers have started arriving in Parliament House before the budget is presented. Union Minister Jitendra Singh, Prakash Javadekar has reached Parliament House.

@ 9: 52 am: Finance Minister Nirmala Sitharaman met President Ram Nath Kovind along with Minister of State for Finance Anurag Thakur at Rashtrapati Bhavan. During this, Sitharaman took approval from the President to present the budget. Before the presentation of the budget, there will be a meeting of the Modi cabinet at around 10:15 pm in the Parliament House.

Best Microphone For Recording Youtube Videos in 2021. Best laple mic is must for best audio quality so get best mic for youtube under 2000